My first novel!
A Soldier’s Embrace is a sweet, yet exciting story. The characters are captivating and the settings are perfect. The dialogue between the characters is well written and realistic. Ms. Romero has written a great historical romance.

This week’s writing, I found I need information on what the etiquette was for mourning in during the last 1870’s. For anyone who has suffered the loss of someone close, our modern society unfortunately doesn’t give a person time to grieve.
Not so in Victorian times. Society took their cue from her for everything from daily life to the proper mourning of death. When the Queen’s beloved husband Albert passed, Victoria fell apart and took a grieving nation along with her. In fact until the day she died, Victoria never stopped grieving.
America was a little less strict with their expectation of morning a deceased. The length of mourning depended on your relationship to the deceased. Widows were expected to wear full mourning for two years. Everyone else presumably suffered less. Full mourning was black, black and blacker. Black was thought to be the symbolic of spiritual darkness. Death was common and when someone died, the proper attire had to be obtained quickly. Many shops catered to the trade; the largest and best known of them in London was Jay’s of Regent Street. 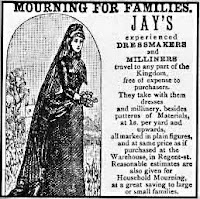 Opened in 1841 as a kind of warehouse for mourners, Jay’s provided every conceivable item of clothing you and your family could need. And because it was bad luck to keep mourning attire after the mourning period, particularly crape, that meant buying clothes all over again when the next loved one passed. Nice business, huh?
Dresses for deepest mourning were usually made of non-reflective paramatta silk or the cheaper bombazine.

Dresses were trimmed with crape, a hard, scratchy silk with a peculiar crimped appearance produced by heat. After a specified period the crape could be removed, this was called "slighting the mourning." The color of cloth lightened as mourning went on to grey, mauve, and white. This took you into the period called half-mourning. Jewelry was limited to jet, a hard, black coal-like material sometimes combined with woven hair of the deceased or keeping a lock of their hair in a locket. That way the decease could always be close to your heart.
Men had it easy as usual. They simply wore their usual dark suits along with black gloves, hatbands and cravats. Children were not expected to wear mourning clothes, though girls sometimes wore white dresses.
The length of mourning depended on who died. The death of a spouse was deep mourning for two years. If a widow needed to remarry for monetary sake, she could after one year. For children mourning parents or vice versa the period of time was one year, for grandparents and siblings six months, for aunts and uncles two months, for great uncles and aunts six weeks, for first cousins four weeks. While in mourning, social activities were curtailed pretty much until society felt there had been a respectable amount of time. 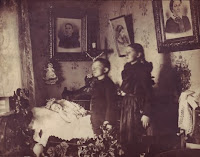 Photographing the dead also served as a way to remember them, especially with children because the family may not have had time to photograph them in life.